Skip to content
“Declare His glory among the nations, His marvelous deeds among all people!" - 1 Chronicles 16:24

UNDER THE SHADOW OF HIS WINGS:  “If I had not known Jesus I do not know if I would still be alive” 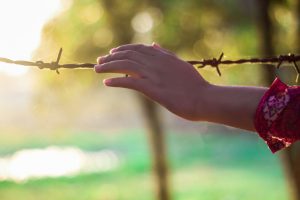 “I was born in the country of Laos. My family was Christian. Since my baby years I knew Jesus. I lived a godly and clean life until 19 years of age. What I remember is that I was running from soldiers who shot me in the head. But I didn't die. I prayed, “God please help me so the people shooting the guns won't kill me. I have lived a clean life. Please help me!” He did help me.

Later, before I met my husband, I went to live in the forest with friends and family from 1976-1977.  That was a very difficult time. We had no other clothes, no medicine, and no food except for potatoes and bamboo.

For two months there were abscesses on the bottoms of my feet. I had to walk on my heels.  Both of my entire legs hurt and I cried in pain. Then a man came and helped me. He put medicine on my feet and in ten minutes I could walk again.

During all of this time I did not leave God. I kept praying and He helped me.

It was after that I married and soon after became pregnant. There was a big problem during my pregnancy and delivery of this child. There was no doctor and my legs swelled. The labor lasted for thirty-six hours. The baby was only half out with his head appearing first. Some of the people wanted to call on the spirit, a practice called “len pii” to make the baby come. I wasn't willing to do that and prayed only for Jesus to help. I confessed all of my sin and repented  then the baby came out easily. So, after a hard labor I delivered my first male child  named Phonesy.  He was born in our home as we did not have enough money because we were mountain people who lived outside the city.

Three years later another baby son, Soulivanh, was born. Then my husband went to find a job in the nearby city so we would have enough money for food. Our lives were quiet for the next two years. At the end of two years we went to Thailand to stay in a refugee camp. There our third child, a baby daughter named Phoung Phet was born.

In the camp, we went to church every Sunday and prayed that God would help us come to the USA. In 1989 He answered our prayers and we arrived in California. There we met “Aajan Linda” who helped us in many ways and provided Christian fellowship and Bible classes.

Someday we will all be in heaven together with Jesus. If I didn't know Jesus I would be so depressed. I don't even know if I would be alive. I saw so many of the people who did not know Jesus who did not make it. But I did.  He kept me! He delivered me! I lived in the shadow of His very great and safe wings!